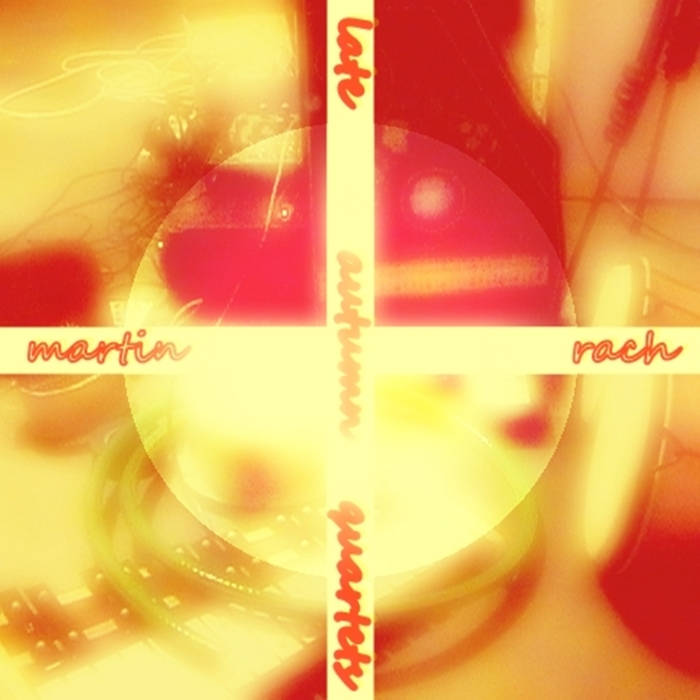 and:
double swing - both ziters, metalophone and recorder placed under metal bowl, zooming in and out

root architecture - both zithers, bongo drum and mixer routed onto itself

"As the title suggests explicitly the whole consists of 4 compositions. It is a notch in a series of seasonal quartets. It's a peculiar issue where different and intriguing facets and methods in music are juxtaposed against each other. Martin Rach, the artist from Lithuania uses various instruments (metalophone, zither, kalimba, bongos, Korg Volca bass) and at times special treatments for those ones. More profoundly, improvised noise, droning scalloping and ambient hisses are the follow-ups to lone string plucking the outing started with in fact. Furthermore, there are represented a bunch of grey, superimposed areas of sound thereby providing two folded sonic appearances. The issue comprises some definitive turns – from exquisite stringed and glockenspiel-tinged arrangements (at least they used to sound in that way) to rough and strident synthesiser-based shows (at Raving Threads); from new weird-esque folk tunes to pummelling yet variegated noise beams to ear piercing droning (at Root Architecture). In spite of it throughout the course the listener can perceive the determined direction on these diverse elements. Indeed, it is not chaotic it is expertly built up. It is a pre-eminent issue indeed."

These quartets are pieces that capture Rach at his improvisational best with a heavy touch of what he calls sound surgery, which is I am assuming Rach coming back around and adding other sounds whether a bongo (don’t wince), a kalimba, or something else. However, Rach doesn’t lose the freshness of the sound after reworking it.

Late Autumn Quartets opens with “Double Swing” which begins mainly as a percussive improvisation, but then the zithers come more into focus which is probably due to Rach’s recording set up as the recorder is not stationary, moving the sound closer and then further away. “Squared Circles” is composed of zithers, a kalimba and a bongo (hey, don’t wince; it works). But just as you got comfortable with the first two acoustic tracks on Late Autumn Quartets, Rach swivels and begins “Raving Threads” with a Korg volca bass and then quickly enters the swirling noise of electronics. Wonderful. The four track album closes out with “Root Architecture” which begins with a wall of sound as the zithers and bongos are mixed back into themselves and into the realm of sweet, sweet noise.

All the tracks of Late Autumn Quartets are full and engaging, sometimes trance-like, but always intoxicating. If you like it you can either download it for free at Free Music Archive or drop Rach a few shekels on Bandcamp."

"Late Autumn Quartets’ sounds like a room full of automatons dispassionately hammering on dulcimers, a child’s xylophone and perhaps a banjo or two. Whatever setup Martin is using to strike and excite his sound objects is put to good use here, revealing a decent variety of tone colors, even considering the relative staticity of the strange-attractor rhythms. The second half of the 4 track album integrates electronics, with the third track somewhat inexplicably meshing the clattering machines with electronic dance music, failing interestingly."